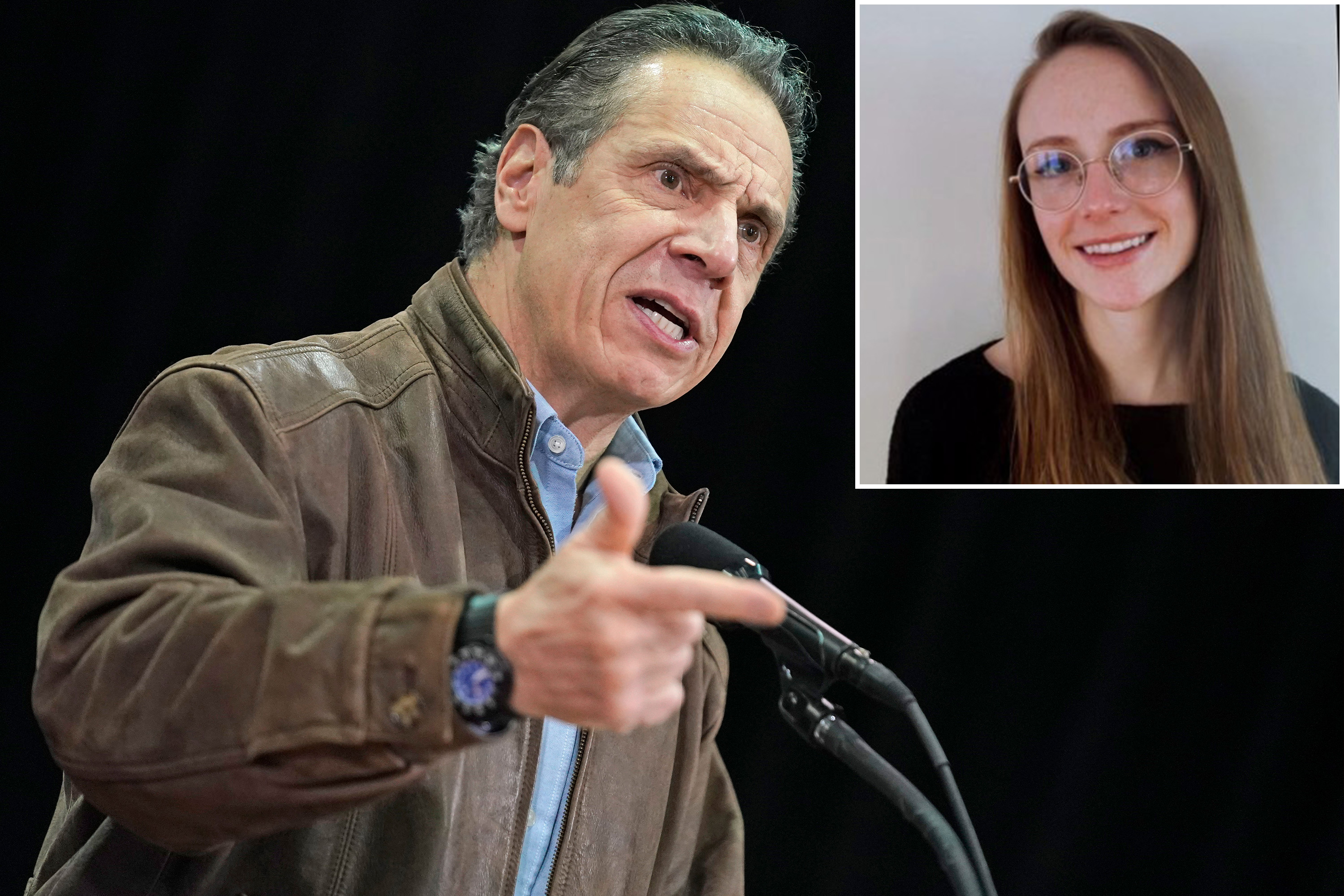 A second woman has accused Gov. Andrew Cuomo of sexual harassment, according to a new report.

Charlotte Bennett, a 25-year-old former aide to Cuomo, told The New York Times the governor asked her inappropriate personal questions and had told her he was open to relationships with women in their 20s.

Bennett, who worked as an executive assistant and health policy adviser, told the Times the interactions took place in the spring, as the COVID-19 pandemic flared.

She described a June meeting in Cuomo’s Albany office, when he griped about being lonely during the pandemic and whined he “can’t even hug anyone.”

Cuomo, 63, then pressed her on who she last hugged, she said.

“I understood that the governor wanted to sleep with me, and felt horribly uncomfortable and scared,” Bennett told the Times. “And was wondering how I was going to get out of it and assumed it was the end of my job.”

Bennett, who grew up in Westchester County, is around the same age as Cuomo’s oldest daughters. She told the governor how she had once played soccer against one of his girls.

Cuomo never made any physical advances, she said.

She reported Cuomo’s conduct to his chief of staff and was transferred to another job with an office at the other side of the Capitol, Bennett said. She left the administration in November.

The revelations come in the wake of former staffer Lindsey Boylan accusing Cuomo of sexual harassment, including planting an unwanted kiss on her in his office.

Boylan tweeted at the governor Saturday evening as word broke of Bennett’s accusations.

“You are not going to derail or destroy any more lives @NYGovCuomo,” she wrote.

“Ms. Bennett was a hardworking and valued member of our team during COVID. She has every right to speak out,” the governor said.

“When she came to me and opened up about being a sexual assault survivor and how it shaped her and her ongoing efforts to create an organization that empowered her voice to help other survivors, I tried to be supportive and helpful. Ms. Bennett’s initial impression was right: I was trying to be a mentor to her. I never made advances toward Ms. Bennett nor did I ever intend to act in any way that was inappropriate. The last thing I would ever have wanted was to make her feel any of the things that are being reported,” he said.

Beth Garvey, special counsel and senior adviser to Cuomo said in a statement that Cuomo “has requested an independent review and all staff will cooperate in that endeavor. Former Federal Judge Barbara Jones will lead the review.”

Bennett had been “thoroughly debriefed on the facts which did not include a claim of physical contact or inappropriate sexual conduct. She was consulted regarding the resolution, and expressed satisfaction and appreciation for the way in which it was handled,” Garvey said.

“The determination reached based on the information Ms Bennett provided was that no further action was required which was consistent with Ms Bennett’s wishes,” Garvey said.

“Although in no way required by law, the Governor has requested an independent review and all staff will cooperate in that endeavor. Former Federal Judge Barbara Jones will lead the review.”

Reaction to the news from fellow pols was immediate.

“As I previously stated, all allegations of harassment must be taken seriously. A truly independent investigation is warranted,” said Assembly Speaker Carl Heastie, a fellow Dem.

Senate Leader Andrea Stewart-Cousins: “The continued allegations are deeply disturbing and concerning. The behavior described has no place in the workplace. A truly independent investigation must begin immediately. ”

Rep. Elise Stefanik (R-Glens Falls) Elise Stefanik, who has called for Cuomo to resign over the Boylan allegations, said Saturday evening that “Gov. Cuomo is a criminal sexual predator and he must immediately resign.”

“I was one of the first and one of the only elected officials to call on the governor to resign on Dec 14th. Today, it’s time for other New York State leaders to grow a spine,” she said.