US expresses ‘unwavering support’ for Ukraine amid Russian military movements 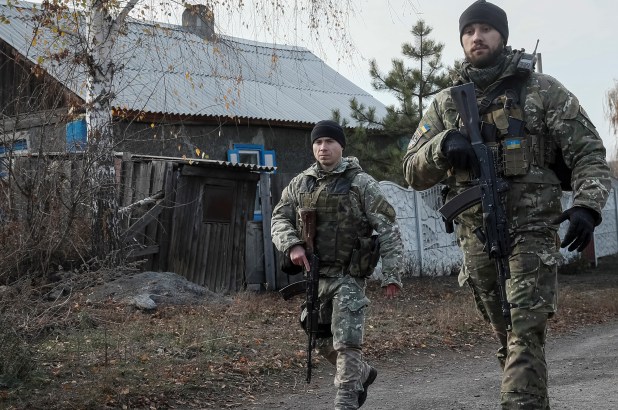 Servicemen patrol in the village of Katerynivka, disengagement area of government and Russian-backed rebel troops, in the eastern Ukrainian region of Luhansk, Ukraine on Nov. 2, 2019.
REUTERS/Gleb Garanich

Blinken reached out to Ukrainian Foreign Minister Dmytro Kuleba on Wednesday and “affirmed the United States’ unwavering support for Ukraine’s sovereignty and territorial integrity in the face of Russia’s ongoing aggression in the Donbas and Crimea​,” the State Department said in a statement.​

Earlier this week, National Security Adviser Jake Sullivan spoke to his Ukrainian counterpart in the face of “continuing aggression.”

NATO members also met this week to discuss the Russian military buildup in the disputed territory.

“Allies shared their concerns about Russia’s recent large scale military activities in and around Ukraine. Allies are also concerned about Russian violations of the July 2020 ceasefire that led to the death of four Ukrainian soldiers last week,” a NATO official said.

“Playing with muscles in the form of military exercises and possible provocations along the border is a traditional Russian affair,” Zelenskiy said.

“In this way, it (Russia) seeks to create an atmosphere of threat and, at the same time, of pressure during the ceasefire negotiations and for peace as our value.”

U​kraine and Russia have traded blame for the recent increase in violence in the Donbass region where the two nations’ troops have been fighting since 2014 in a conflict that has killed more than 14,000 people, according to estimates from Kyiv.

Pentagon spokesman John Kirby said the US military was aware of the Russian troop movements and said the escalations, including the killings of four Ukrainian soldiers last week, violate a 2020 ceasefire.

Town of Hempstead board unites in opposition to marijuana sales